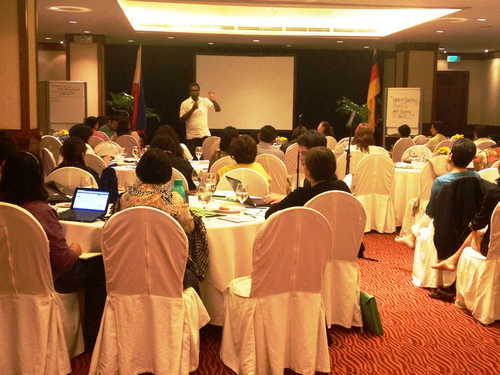 The GIZ managed project called “Promotion of Green Economic Development” (ProGED) was launched with the help of ASSIST on March 11-13 in Marco Polo Plaza Hotel, Cebu.

The 3-day event started with an official project launch, followed by a symposium, a workshop and a press conference. The event was hosted by Dr. Volker Steigerwald and Raquel Capio from GIZ, and facilitated by ASSIST Director of Partners and Networks, Kama Neson Ganeson and Group Associate Miriam Gabon. Government representatives from Bohol, Department of Science and Technology (DOST) Cebu, Department of Trade and Industry (DTI), representatives of several Micro, Small and Medium Enterprises (MSMEs) and people from the Zero Carbon Resorts (ZCR) project were also in attendance.

The main objective of the project is to help Micro, Small and Medium Enterprises, as well as government institutions contributing to the economic development, increase awareness of and gain knowledge on how to implement environment friendly, “climate-smart” and inclusive strategy. ProGED will initially focus on the tourism sector due to its high potential for investment and employment. Among the upcoming interventions within the project framework, multiple information and awareness campaigns, as well as green service facilitation are planned.