Light it up: DEG-funded Solar Project Brightens the Streets of Cambodia 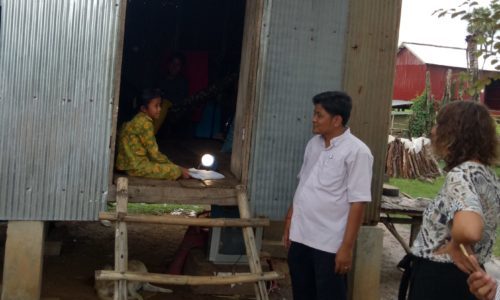 About half of Cambodia’s population do not have access to electricity, particularly in Kampong Thom province where many villages live in darkness. DEG, a development finance institution in Germany, funded the Energy Efficiency Initiative (EEI) project with the aim of using sustainable solar power to light up Cambodia’s communities. The project was co-financed by Philips and implemented by ASSIST.

DEG representative Alexandra Neuwirth, investment manager of the ASEAN region visited the villages of Kampong Thom to see the impact of the project. One of the beneficiaries, Ms. Klam Theuong, used a battery that entailed heavy costs before she received the more sustainable and cheaper solar product. Ninety six percent of the beneficiaries also reported that the project has a good economic and safety impact on them. Kerosene lights usage, which poses a lot of risks, decreased by 99% due to the project.

The lack of electricity in the province greatly hindered children’s education as it was difficult for them to study at night. The project brought electricity to approximately 50 classrooms which resulted in increased efficiency over the past year among the students.

One of the beneficiaries, Ly Louen, mentioned that thanks to the Solar Home device given to them, they were able to safely deliver their baby and that he always uses it to keep his house bright and warm at night for his wife and baby. Another beneficiary, Chheun Lors said that along with using the Solar Home device for general lighting, cooking and reading, she can also use it for phone charging, farming and fishing at night.

Cambodia’s Kampong Thom province is a testament to the success of the EEI project. ASSIST and Philips will continue working together to light up more areas in need.