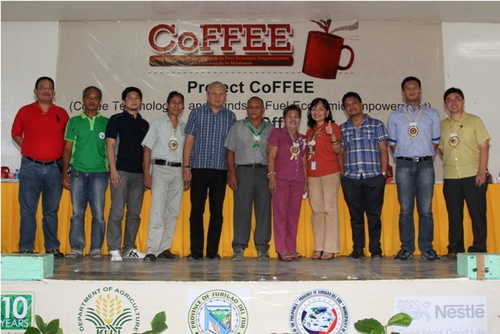 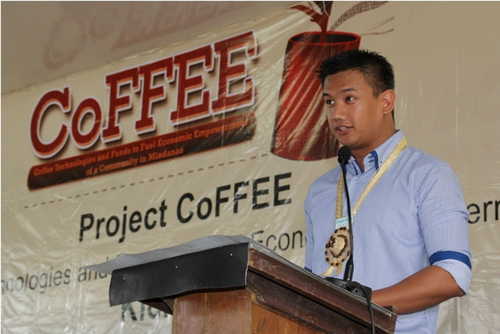 Government officials, coffee farmers, media representatives, and project proponents Nestlé Philippines, Inc. (NPI) and ASSIST convened at the municipal gym of Tagbina in Surigao del Sur on February 27, 2013 for the launching of DEG-supported project CoFFEE (Coffee Technologies and Funds to Fuel Economic Empowerment of a Community in Mindanao).

This event was graced by the presence of several noted public officials and well-attended by almost 300 participants. Hon. Mayor Donnell Polizon of Tagbina Municipality welcomed everyone, including Lynn Pariñas of the Department of Agriculture (DA), Provincial Director Andres Yparraguirre of the Department of Trade and Industry (DTI), Vice Mayor Nelita Cotiangco of Tagbina and Hon. Governor Johnny Pimentel of Surigao del Sur – all of them keynote speakers advocating the goals of the project in providing farmers new technologies by acquiring new methods and approaches on coffee farming for a more sustainable coffee industry in the country.

ASSIST Program Manager Mike Saycon discussed the project overview while NPI Nescafé Consumer Manager JP Bayangos talked about the significance of the coffee industry and the impact of the project to all stakeholders.

Furthermore, the occasion witnessed the launching of the “Recognition/Awards Program for the Farmers” by NPI’s Head of Agricultural Services Arthur Baria. This was followed by a Commitment Signing among guests and participants planting their dedication in support of the project, which was then sealed by the Ceremonial Planting held outside the gym.

The event was covered by media newsprints and radio broadcasted live in the province. For the next activities, the project looks into a thorough discussion among local government heads and raising community awareness about the project.